On a day trip, we visited Cairnpapple Hill and took in the amazing view with the 5,000 years of history. I did share the fact that the henges, cairns and standing stones we would visit throughout Scotland were locations where bodies had been buried and sacrifices and cremations had taken place over the course of thousands of years, but that did not keep my little monkeys from leaping over the plots of the Christian family who had been lain to rest, or from joyfully rolling down the banks of  the Cairnpapple henge. There was not a somber member of our party as the wind carried our locks playfully into the backdrop of a gorgeous blue Lothian sky. 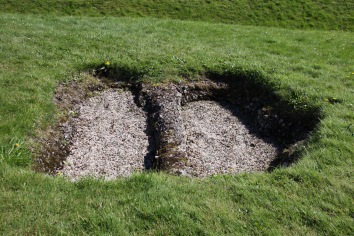 Kristina
At Linlithgow Palace, rolling down hills continued until we acquired some more grass stains and the swans captivated our attention.  The children didn’t care that this was the birthplace of Mary, Queen of Scots, but were enraptured when Emma told us that the reigning Queen owns all mute swans and if you harm one there may be a hefty £5,000 fine levied by the Crown. This left me wondering what the punishment was 100 years ago. We made our way up to the courtyard and I took a photo of Kurti in his knight costume in front of the very fountain that flowed with red wine during Bonny Prince Charlie’s visit back in 1745. The kids thought it was a stupid idea to waste so much wine and before I knew it they had run off to play hide-and-seek. Dare I admit they were hiding primarily from me and all my history factoids? 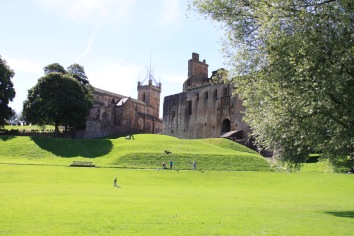 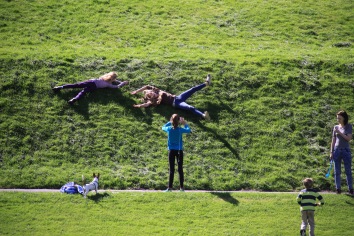 Making our way to Blackness Castle on the Firth of Forth, we found quite the formidable fortress. Known as the ship that never sailed, we walked the lush lawn and looked out across the water while I silently cringed thinking of all the prisoners who had been housed here over the centuries. I will say to any Outlander fans that the episode with Black Jack’s knife pointed at Claire’s exposed breast did invoke a bit of the sinister imagery that danced around in my head.

Everyone at the well inside the fortress walls of Blackness

Kurti near the entrance of Blackness
Another day we went to a favorite refuge of Mary, Queen of Scots, Craigmillar Castle. After visiting the chamber at Edinburg Castle where David Rizzio, was stabbed 56 times before the pregnant Mary, we were now at the very location where it is said she plotted the murder of the main assailant–her  husband, Lord Darnley. Darnley had apparently ordered Rizzio’s execution out of jealousy as it was rumored the child she was carrying was Rizzio’s. I didn’t share this little tidbit with the children but rather used more castle hide-and-seek to entice them into exploring. Then everyone had the opportunity to practice a bit of archery with a smartly dressed professional archer, and then climbed a  fanciful twisting yew tree, which is consequently the type of tree believed to have provided wood for bows and arrows.

Inside Craigmillar Castle
Again we were blessed with cooperative weather, and began packing up for our journey to the the Scottish Highlands….. 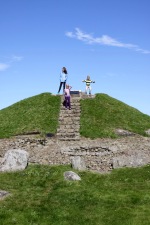 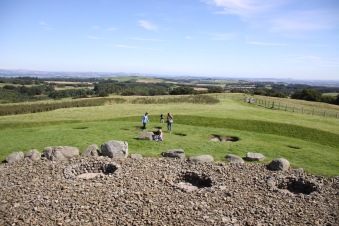 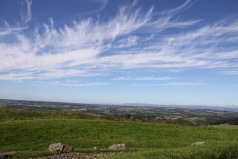